Salesforce Ecosystem? Have they all gone green? 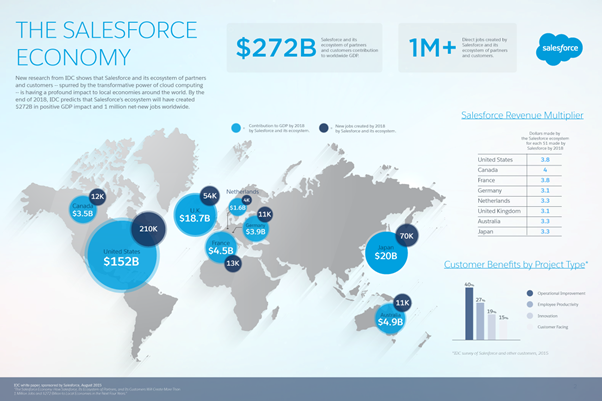 It is estimated that the Salesforce Ecosystem will have generated £212 Billion in terms of its gross domestic product (GDP) impact across the world by the year 2018, not to mention having created one million jobs. The growth of Salesforce’s network of partners, of which we all at Silver Softworks are very proud to be one, and customers can be put down to our desire to connect with users in the context of a single network, as well as the operational advantages which come with sharing the same system.

Providing customers with new ways to network, forming partnerships across borders and language barriers, is something Salesforce has done very well. But when they created the Salesforce ‘Ecosystem’ (the AppExchange), were they aware of the double meaning it would come to embody? Is Salesforce’s Ecosystem been a key part of the growth in ‘green tech’?

Mark Benioff, Salesforce’s CEO and founder, has been lauded for his company’s contribution to green tech enterprises all over the world. That’s down to the software as a service (SaaS) model of Salesforce, which uses cloud computing to provide CRM ‘on tap’ to its customers. Organisations in sectors from finance to manufacturing and marketing are switching on to the benefits of having their IT infrastructure based in the cloud, rather than relying predominantly on a site based server.

So who makes up the green tech sector, and is it actually a sector, after all? It might be said that firms involved in green tech come in all shapes and sizes, from electric car manufacturers to companies similar to Salesforce which use SaaS to provide their services. This has led to many other corporates getting in on the act (green sells!) and with employees demanding social responsibility (CSR) programmes which again Salesforce led the way with their Salesforce.org 1/1/1 initiative and HR policies that require their staff to be socially responsible.

So the question is…. Is the Salesforce Ecosystem green? Well, to a significant drum roll…. yes…SaaS services such as the Salesforce allow us, our partners, customers and competitors to save on overheads, all while adhering to the environmental standards which Salesforce have set themselves.

Salesforce themselves have, naturally, sought to strengthen their reputation as one of the instrumental players in green tech, opening up a 100 percent green, France-based data centre – one of three new bases Salesforce has in Europe. Their move there means a slashing of the carbon footprint attributable to French subscribers to the service, and the facility itself continues to tick the boxes when it comes to keeping green. The centre itself also relies on energy sources which are renewable, which was a critical decision point for the Salesforce leadership team making good on their 2013 pledge which Salesforce made, declaring that its whole infrastructure would eventually take advantage of sustainable power. The other European locations in which Salesforce has a localised presence are Germany and the UK.

It is curious that a company which one wouldn’t immediately categorise as ‘green tech’ has become such an integral part of it. So here’s to the Salesforce Ecosystem, our home, whichever meaning you care to apply to it!

Find out how we utilise the Salesforce platform here.